How Grapefruit Juice Affects Some Drugs

When drugs are swallowed, they may be broken down (metabolized) by enzymes and/or absorbed using transporters in cells found in the small intestine. Grapefruit juice can cause problems with these enzymes and transporters, causing too much or too little drug in the body.

Some drugs, like statins used to lower cholesterol, are broken down by enzymes. Grapefruit juice can block the action of these enzymes, increasing the amount of drug in the body and may cause more side effects.

Other drugs, like Allegra (fexofenadine) used to treat allergies, are moved by transporters into the body’s cells. Grapefruit juice can block the action of transporters, decreasing the amount of drug in the body and may cause the drug to not work as well.

The Canadian Medical Association Journal (CMAJ) released a review of drugs that interact with Grapefruit, “43 drugs in dangerous ways.”

List of medications that may cause severe side-effects when interacting with grapefruit. 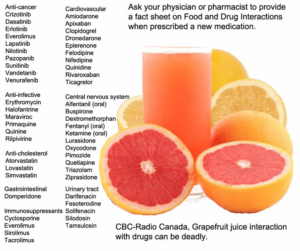