USDTL was the first laboratory to commercially introduce meconium testing to the market in 1991 and we have been seen as the leaders in newborn toxicology ever since.

Meconium contains the amniotic fluid swallowed by the fetus in the last half of pregnancy and is released as the first stools after birth. Meconium is easier to collect than neonatal urine and provides a much longer window of exposure of up to approximately 20 weeks.

Meconium specimens can only be submitted through hospital or health system accounts. 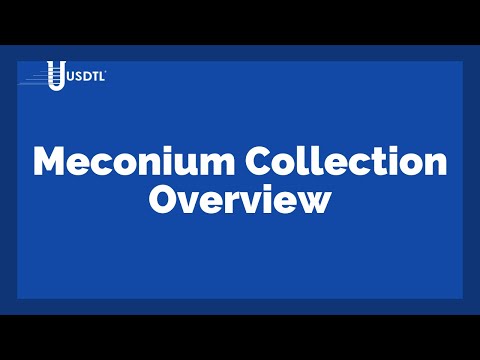 Sample Amount: 3 grams     (We recommend weighing the specimen on a jeweler’s scale.)

Stability Window: Drugs and metabolites are stable in meconium for up to 2 weeks at room temperature. Storage in a refrigerator or freezer is preferred.

How much meconium is needed for the test?

A minimum of 3 grams of meconium (about a teaspoon) is normally required. However, for best results, we recommend collection of the entire passage of meconium until the milk stool appears.

Is there a time frame in which meconium must be collected for testing?

Only with regard to being able to test for fatty acid ethyl esters (FAEE), the ethyl alcohol biomarker in meconium. To be able to test for FAEE, the meconium specimens must be collected within 18 hours after birth. All other drug testing can be done on meconium regardless of when the meconium is passed as long as it is meconium that is being collected and not milk stool.

What are the meconium specimen storage requirements?

Drugs and metabolites are stable in meconium for up to 2 weeks at room temperature. Storage in a refrigerator or freezer is preferred. Alcohol biomarkers specifically fatty acid ethyl esters (FAEE), are sensitive to heat and light; therefore, the preferred shipping method is frozen on dry ice. Since shipping via this method is both difficult and expensive, most institutions send specimens at room temperature and realize that the FAEE concentrations may be reduced. USDTL accept specimens that are shipped at room temperature.

Meta-hydroxybenzoylecgonine (m-OH-BZE) is a metabolite of cocaine which is often present in the meconium of neonates born to cocaine-using mothers. It is a minor metabolite in adults, but it has been identified as the only cocaine metabolite present in 23 percent of meconium specimen screening positively for cocaine.*